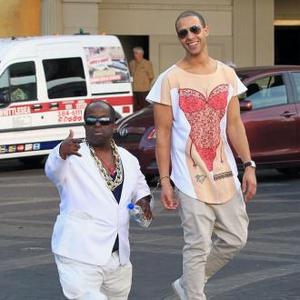 The JLS singer is currently celebrating his last weeks of freedom with a nine-day trip to Las Vegas before he ties the knot with The Saturdays singer Rochelle Wiseman and his friends have pulled off a series of jokes at his expense, with the latest seeing bandmate Oritse Williams persuading former world heavyweight boxing champion David Haye threaten the 'Makes Me Wanna' singer at a club in Las Vegas.

David bumped into Marvin and reacted badly, telling the singer to be careful - before revealing he had been the butt of another joke.

A source told the Daily Mirror newspaper: ''David told Marvin he'd been drinking too much and he should look where he was going. Marvin, as you can imagine, was absolutely terrified.

And he wasn't about to argue back, no matter how much he'd drunk. But once he'd been shaken up enough, David burst out laughing, slapped him on the back and bought him another drink.''

The latest prank comes after a week of drinking and partying on a yacht in Las Vegas. Last week Marvin was chained to a dwarf for an evening and hundreds of condoms with his face on them were handed out to fellow revelers.