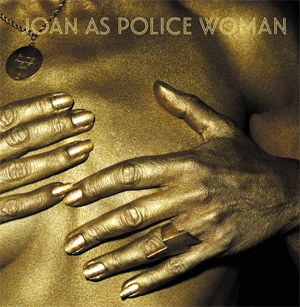 'Holy City' is the new album's prime Motown/Hi label-influenced pop fusion, a brilliantly instinctive lead single inspired by a visit to Jerusalem's Wailing Wall and understanding people find ecstasy in different ways, from praying to making music. The track's atmospheric closing scat-rap is from Reggie Watts: "he's an incredibly inspired musician as well as being a comedic genius," ventures Joan, "he challenges you to think much deeper but in a way that's subtle, plus he's so comfortable, natural and sensual in his body... I contacted him through mutual friends, and a week later, he was recording on my record with the freedom to do what he wanted. It felt very magical."

'Holy City' is available digitally now but is also released on 7" vinyl as a AA-side single with the album's title track, 'The Classic' on 17th Feb

The Classic, the fourth album of originals by the uniquely charismatic artist known as Joan as Police Woman, builds on the creative impetus and success of its 2011 predecessor The Deep Field. As ever Joan strives to create music rooted in an intimate, elemental and uplifting brand of soul combined with her own unique serene, torch-singing temperament, but whereas melancholy was a principle feature of Joan's earlier work, this time there's a more liberated feel than ever before.

Famously a key member of Antony Hegarty's Johnsons and Rufus Wainwright's band until she began making her own records, Joan was inspired by their combined piano balladry while infusing it with her own stripped-down-soul and torch-song approach. Her 2006 album debut Real Life was followed by To Survive (2008), written in the aftermath of her mother's death; in 2009, she released an interim covers album simply called Cover, before The Deep Field confirmed Joan had started a full recovery and was determined to beat the blues. Which takes us to The Classic, where Joan reaches even further toward the light.

A UK tour has been confirmed for April/May, plus two low-key shows in March.  The Lexington show, announced to fans via Joan's Facebook page, sold out in a matter of minutes. Tickets for all the other shows on sale now: