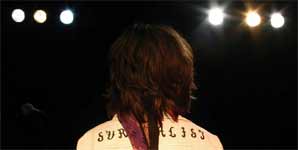 The debut full-length album from Joan As Police Woman is 'Real Life'. It features the stunning vocals and songwriting talent of New Yorker Joan Wasser already known for her live and recorded work with artists such as Antony and the Johnsons (Antony also duets with Joan on one of her album's highlights, 'I Defy'), Nick Cave, Scissor Sisters, Sebadoh, Elton John, Rufus Wainwright and more..

The album is preceded by the release of this single, 'The Ride', which showcases Joan's beautiful, expressive voice and emotive lyric-writing. Comparisons to Nina Simone, Dusty Springfield, Annette Peacock and Chrissie Hynde give you an idea of her talent.

Following studio time recording a new Rufus Wainwright record, Joan As Police Woman will be touring throughout May supporting The Guillemots. On these dates Joan Wasser will be performing solo, she will then be joined by Joan As Police Woman band mates Rainy Orteca (bass) and Ben Perowsky (drums) for headline shows and festivals throughout the Summer.

Joan As Police Woman and Benjamin...

Joan as Police Woman, The Ride,...