Joan Jett unveiled her first advert campaign for People for the Ethical Treatment of Animals (PETA) in Florida on Sunday night (04.11.12). 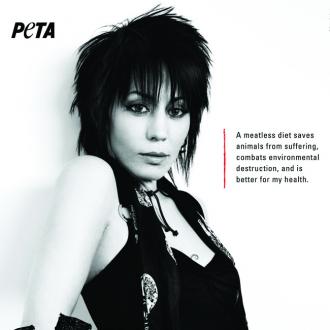 Joan Jett unveiled her first campaign for People for the Ethical Treatment of Animals (PETA) on Sunday night (04.11.12).

The 'I Love Rock 'n' Roll' singer attended the unveiling of the advert in Florida and she was also presented with the Nanci Alexander Activist Award, named after PETA's founder, by fellow rocker Iggy Pop.

PETA UK founder Ingrid E Newkirk said: ''Joan takes every opportunity to talk about the importance of being kind to animals, and she's among the most dedicated activists I've had the pleasure of knowing.

''People listen when this star talks. She's had a positive influence on countless fans.''

Iggy - who also stars in a new advert for the charity - is known for appearing bare-chested when he performs live, but put on a smart shirt for the unveiling.

The adverts are both part of PETA's 'I Am a Vegetarian' series, which has previously featured big names such as Sir Paul McCartney and Pamela Anderson.

Joan's advert sees her stand next to a slogan saying: ''A meatless diet saves animals from suffering, combats environmental destruction and is better from my health.''