Joan Jett's Former The Runaways Bandmate Jackie Fox Has Accused The Group's Late Producer And Manager Of Raping Her When She Was 16. 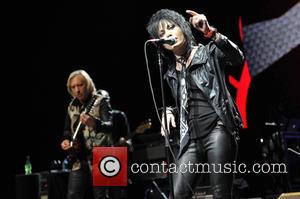 The bassist claims Kim Fowley sexually assaulted her in a motel room on New Year's Eve, 1975 in front of two of her bandmates.

Fox tells The Huffington Post she was forced to take Quaalude's and was unable to react when Fowley, who lost his battle with stomach cancer in January (15), attacked her following a gig in Los Angeles.

She says, "You don’t know what terror is until you realise something bad is about to happen to you and you can't move a muscle. I can't move. I can't speak. All I can do is look him in the eye and do the best I can do to communicate: 'Please say no'.

"I don’t know what it looked like from the outside. But I know what was going on inside and it was horror... I remember opening my eyes, Kim Fowley was raping me, and there were people watching me."

Her account has been backed up by The Runaways singer Cherie Currie and teenage songwriter Kari Krome, who were in the motel room when the rape incident took place.

Krome, who was 14 at the time, says, "It turned into this really disgusting theatre performance that he put on. Jackie was dead drunk - like corpse drunk. She was just laying down on her back, sound asleep, out of it. He had to manually move her body parts into positions that he wanted for himself.

"I didn’t know what to do. Go outside, drive, find a pay phone and call the police? I didn’t want to call the police on anyone - but at the same time I knew what was happening was wrong."

Fox says none of her colleagues wanted to discuss the alleged rape afterwards and so she decided not to talk about it, adding, "I didn’t know if anybody would have backed me. I knew I would be treated horribly by the police. I was going to be the one that ended up on trial more than Kim. I carried this sense of shame, thinking it was somehow my fault for decades."

She claims the shame and torment she felt led her to attempt suicide during a tour of Japan in 1977. She quit the band shortly afterwards and was replaced by Victory Tischler-Blue.

Fox, now 55, only decided to go public with her rape ordeal after realising her story could help others.

She adds, "I realised, 'Oh my God, this is what's happening on college campuses'."

The bass player reveals she had hoped to confront Fowley years later and tell him she'd never forgive him for what he did to her, but he refused to talk to her.

She has, however, attempted to make sure her friends and former bandmates, who were witnesses to Fowley's actions, know she doesn't blame them for staying quiet: "One of the things I've tried to do with every bystander is let them know it's not their fault. I also have to not blame myself for what happened to them. We are all victims of what Kim did."

Jett has denied witnessing the event as Fox describes it, while Currie has claimed she "spoke up and stormed out of the room" the night of the alleged rape. The singer also reportedly tried to write about the incident in her 2000 memoir, but Fox blocked it from being published.