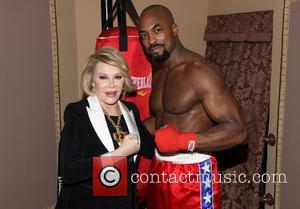 A number of British politicians are backing a petition calling for Joan Rivers' upcoming tour of the U.K. to be cancelled amid fury over her remarks about the Middle East conflict.

The funnywoman recently hit headlines when a video appeared online showing her talking about the civilian victims in Gaza following clashes between Israeli and Palestinian troops.

She appeared to say, "They started it... You deserve to be dead... At least the ones that were killed were the ones with very low Iqs."

Rivers subsequently insisted her words had been taken out of context, but she is now facing mounting protests in Britain ahead of her planned stand-up tour of the country in October (14).

A petition calling for the shows to be cancelled has been started by Newcastle City Councillor Dipu Ahad, and has gained more than 13,000 signatures as well as backing from Member of Parliament (Mp) George Galloway.

A message posted alongside the petition on Change.org reads, "We urge the tour organisers and all the venues to cancel her tour. Please sign this petition to show that she is not welcome anywhere in our towns and cities."