Joan Rivers received a less than positive response for her Adele fat jokes. 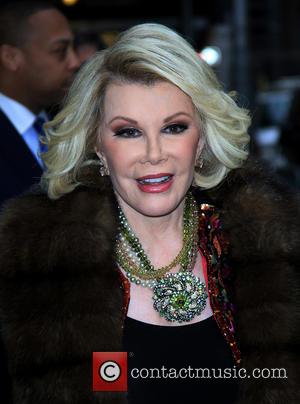 Joan Rivers is really taking the heat off Seth MacFarlane following his performance at the Oscars on Sunday night (February 24, 2013), dubbed "sexiest, racist, anti-Semitic and stale," by the Los Angeles News.

Anyway, the Family Guy man can breathe a long sigh of relief after Joan Rivers went off on a cruel tirade at British star Adele during an appearance on the Late Show With David Letterman this week. Of course, Rivers has made a career from her close-to-the-bone putdowns, though the self-appointed fashion critic appeared to go one step too far in New York.

Oddly, Rivers began by saying meeting Adele was one of the highlights of her Oscars night, with Letterman agreeing she was a "lovely woman." However, things began to turn ugly when the comedienne spread out her arms and puffed out her cheeks - inferring Adele was a little on the heavy side...for no apparent reason. The audience groaned in response, a few heckled, and Letterman looked irritated and annoyed. Rivers pressed on: "Oh no, she's thin. Can we just talk to each other here? What is her song, 'Rolling in the Deep?' She should add 'fried chicken." More was to come, with Rivers revealing how Adele had apparently confided in her about singing. "She was saying, 'My throat, my throat! I don't know if I can swallow!' and I said, 'Oh yeah, you can swallow." Adele Won The Oscar For Best Original Song For Skyfall

Adele won the Oscar for Best Original Song at the Academy Awards this past weekend, which prompted Rivers to joke on Twitter, "On Sunday night, you could easily pick Adele's Oscar statuette out of a lineup. It was the only one wearing Spanx." She just won't let it die, will she?.