Joan Rivers to be buried with red carpet

The late Joan Rivers will reportedly be buried with a red carpet after it is rolled out by elected members of the 81-year-old comedienne's family, including her daughter Melissa Rivers, and friends at her funeral on Sunday (07.09.14). 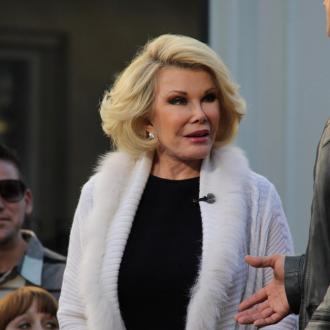 Joan Rivers will reportedly be buried with a red carpet.

The 'Fashion Police' host, who died on Thursday (04.09.14) after being taken off life support after suffering a cardiac arrest during a routine operation on her vocal chords last week, will be laid to rest after a private funeral at Temple Emanu-El in New York City on Sunday (07.09.14).

A source told UsMagazine.com that selected members of the 81-year-old comedienne's family, including her daughter Melissa Rivers, and friends will roll out the red carpet at the memorial and it will then be buried with the star.

The insider added: ''A lot of celebrities confirmed [they will attend the funeral].''

Joan previously claimed she wanted her funeral to be a star-studded, glamorous event.

In her 2012 memoir, 'I Hate Everyone... Starting with Me,' she wrote: ''When I die (and yes, Melissa, that day will come; and yes, Melissa, everything's in your name,) I want my funeral to be a huge showbiz affair with lights, cameras, action.''

She added: ''I want Craft services, I want paparazzi and I want publicists making a scene! I want it to be Hollywood all the way. I don't want some rabbi rambling on; I want Meryl Streep crying, in five different accents. I don't want a eulogy; I want Bobby Vinton to pick up my head and sing 'Mr. Lonely.' I want to look gorgeous, better dead than I do alive. I want to be buried in a Valentino gown and I want Harry Winston to make me a toe tag. And I want a wind machine so that even in the casket my hair is blowing just like Beyoncé's.''

But the late star's close friend Bobby, 79, told gossip website TMZ.com that he is too sick to perform, as he has pneumonia, but his spokesperson said he plans to record a special video message.