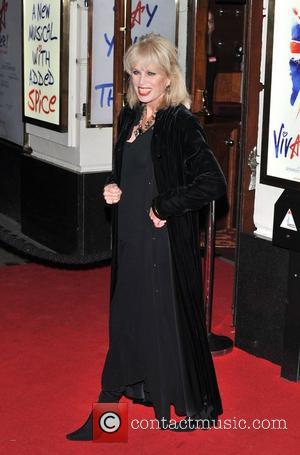 Joanna Lumley, known mostly for her role as the hilariously loathsome narcissist Patsy in Absolutely Fabulous, alongside Jennifer Saunders, was celebrated with a Special Recognition Award last night at the National Television Awards.

She was lauded by her lovely co-star, Saunders, as well as multi-award winning director Martin Scorsese who worked with Lumley last year on Wolf of Wall Street (set to be released this year) via a series of clips in which they praised her. David Cameron was also in that number, although as a supporter of the Green Party that may not be received by Lumley with quite the emotion of her friends.

In Wolf of Wall Street a co-star of hers is Leonardo Dicaprio, whom she is seen kissing in the movie - a clip of which was played at the awards. Despite Ab Fab being one of her most iconic roles, she has also cropped up in a huge number of other roles including James and the Giant Peach, Ella Enchanted, and Tim Burton's Corpse Bride.

As the Telegraph quotes, through tears she said ''I love you so much." Adding, ''This is so strange to see my life played out in front of me, I'm so touched by those things all those people said, I'm so thrilled you saw me kissing Leo.''