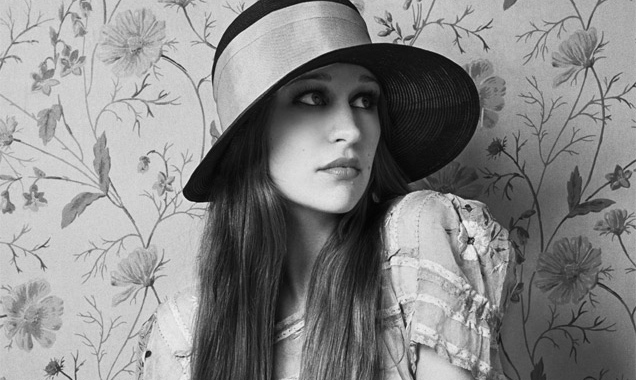 Harpist Joanna Newsom made her film debut in 'Inherent Vice' last year, playing the character of Sortilège opposite the likes of Joaquin Phoenix and Josh Brolin. We caught up with her alongside co-star Jena Malone to find out their feelings on being in a film with such an esteemed actor as Phoenix, the magic behind Sortilege's character and what it's like for Newsom to transition into acting from making music.

Contactmusic: Jena, were you as surprised as we were by the scream Joaquin Phoenix let out in the scene where you show him a photograph?
Jena Malone: Yeah. I knew it was coming and I was still surprised. That's Joaquin; he just sort of creates moments of surprise continually.

Contactmusic: Did you pick a different picture to give him each time?
Jena Malone: The Polaroids, as life, just got pulled as they do. There was no way to plan it. You're just like, 'All right, this is the one.' But there were a few really choice Polaroids in there that I kept trying to slip him, but it wasn't always the right one.

Contactmusic: Joanna, can you talk about your character, Sortilège. I didn't know how much she really exists. Am I supposed to think that?
Joanna Newsom: Well, like so many things in this movie, I don't think you're supposed to necessarily believe any one thing. I love that Paul left it kind of ambiguous in the movie. I definitely believed in her, so if you ask me, she's as real as they come. I think I had to believe in her because I was playing her.
But I think it's one of several really wonderful magical realism touches throughout the movie; she can be part of a scene and then just not be in the scene in the next shot. And, of course, the obvious thing is that the narration from the book, which is this abstract omniscient narrator, has been added to this expanded version of the Sortilège character from the book. So she is not just a semi-mystical stoner pal of Doc's; she actually has visions and she can see inside other characters in their lives, and can sort of see the action from above. So, without a doubt, there's something mystical about her, possibly magical. And that would include immutability, coming and going, and appearing and disappearing.

Contactmusic: Jena, can you talk a little bit about your false teeth in the film? Did you have to go to a dentist and have a prosthetic made?
Jena Malone: Yeah, we made them. There was a professional man that took a measurement and a mouth mold. I mean, to be fair, they really weren't that big of a deal. It was more about just learning how to talk with a retainer again; you know what it's like. And to not constantly touch them with my tongue.
But they were fun to play with. It's always nice to be given something that kind of changes your body, whether it be how you sit or a corset or something-that's sort of like a doorway into another way of physicalizing a character. So I was excited to be able to get to use teeth. That had never been a doorway before.
I mean, we get to do amazing things, strange things, like having those teeth. That was very real at that time, a sort of veneer of perfection, trying to overcome this dark decay and trying to put on this glossy coat of something. I think it really speaks for that culture at that time.

Contactmusic: Joanna, how is acting similar or different to making music as an artistic process for you?
Joanna Newsom: For the most part, for me, they were entirely separate. On the days that I was on set and on camera, I definitely felt completely unmoored. I didn't have any real past experience that I could reference or lean on in any way, not even the very limited theater experience I'd done when I was younger. None of that really seemed to apply. I felt like a complete novice, didn't know anything. I think for the voiceover work, there was a little more crossover because there was certainly a strong musical component to that-not only for me, but I think for Paul. I think he was using the narration. He was looking at it in sort of a musical way, watching the way that the voice and the delivery would rise and fall in parallel to the action, the peaks and valleys and the action on camera, or perhaps would rhythmically mark an edit or a cut. If I had a long run that I was delivering while someone was walking on camera, then perhaps I would speed up or slow down based on the pace that they were walking and I just feel like for the narration to really feel stitched to the film, there was a musical way of thinking about it.

Contactmusic: You have so much acclaim from the musical part of your life. Did you ever ask why he chose you?
Joanna Newsom: I wish I had asked, but I didn't, and he never really gave me any indication. He said at one point that he liked my voice. [Laughs] So, maybe it's that. I don't know.

Contactmusic: Can you both talk about working with Joaquin Phoenix, who plays Doc in the film? He's considered one of the best actors working today. Was that overwhelming at all?
Joanna Newsom: I think I got overwhelmed in advance of shooting those scenes with him. I was definitely nervous. I was scared that my lack of experience and my untested ability as an actor would, potentially, not only not rise to meet him, but would actually drag him down, distract him, pull him out of the action. That was my big fear-that I would waste everyone's time on set that day. I was very nervous.
But there were a thousand different things that conspired to make me not feel that way-just everybody being so welcoming and gracious and the set itself feeling very safe and protected, and creating a space where it was okay to mess up, and it was okay to not know what you were doing. And then, very much, that comfort and ease flowed from the way that Joaquin approached what he was doing and the way he spoke with me between takes, and sort of acted like he just didn't know what he was doing either. [Laughs] That's what he said. I said, 'I don't know what I'm doing.' And he's like, 'None of us knows what we're doing. Every time I go on set I feel like it's the first time.' And I do believe that. I think he was saying it in a self-deprecating way, but, in fact, I think it's a miraculous thing that this incredible master actor is really approaching it as a new experience every single time, just completely vulnerable and wide open and present.

Jena Malone: Yeah, I think someone's talent becomes more of what's unapproachable-the idea of talent. But the actual truth of it is that they're just human beings, and he's a very generous, joyful, humorous, giving person. And I think that that comes out of his pores as an actor as well, and I feel like I got to just sit across the table from him and read eight pages. And it was just a joy. It was new every time. It was unpretentious. There was not a lot of thought, if we have to hit this and do this and do that. Words came and went, and we would laugh. It just felt like play, and, in the ultimate sense, that's what you want as an actor; you want to come into a room and feel like you're constantly discovering something new, but with someone else.
That's the hardest thing, to bring others on your journey, and he's actually one of the best I've ever worked with at doing that. He is really inviting all of the actors in, to come and play on the same level.

Contactmusic: Jena, what's your future with music and what's your future with acting? You did the TV show Portlandia as well.
Jena Malone: That's true. Well, I think that, like anything, it's all just grander and smaller versions of storytelling. We're just narrating. I mean, making music for me is also just a form of storytelling. I get to play characters that I don't get to play as an actor, writing a song about a four-year-old boy or an eighty-year-old woman, or a completely different idea. I get to step into different skins. So I don't know. I don't really have plans on either end. It's just continually playing and telling stories. And however the story needs to be told, that will be the creation that becomes the action of it, whether it be music or film or theater or interpretive dance. [Laughs] You really just have to respect the process more instead of the product of what it becomes.

Contactmusic: And will you be looking for more films or TV?
Joanna Newsom: I'm certainly open to it. I would work with Paul again in a heartbeat. That would be a dream. And I'm sure there are other things I would love to do, but I'm definitely not looking to change my career. I'm certainly open to it though, not changing my career, but to doing another acting project if something was fun and interesting.

Contactmusic: Getting ready for another tour?
Joanna Newsom: Yeah, I hope so. Nothing to confirm yet, but hoping to cook something up soon.

Click Here To Watch The Trailer For Inherent Vice