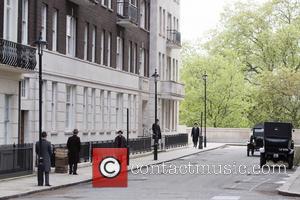 Downton Abbey's Joanne Froggatt is to reunite with her former co-star Nigel Harman to work on a West End play.

The actors were at the centre of a controversial rape storyline, in which Harman's character attacks the housemaid played by Froggatt, and they will now re-team for a production of David Lindsay-Abaire's play Rabbit Hole.

Froggatt will portray Becca - a mother struggling to cope with the loss of her child - in the play, which will be directed Harman.

The actress tells Britain's Daily Mail, "It's a part I've been waiting forever to play. I totally fell in love with the play the moment I read it... it's heartbreaking, but really funny in parts as well. Becca's very different from Anna. She's American, and she's middle class, and she's going through this traumatic time over her child."

Previews will begin at the Vaudeville Theatre in London on 11 September (14).

Sex and the City star Cynthia Nixon won a Tony Award for her role as Becca in a Broadway production, while Nicole Kidman landed an Oscar nomination for her turn in the 2010 film adaptation.