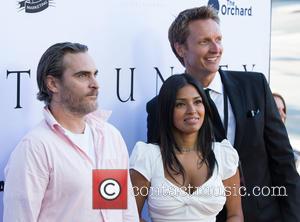 The actor previously worked with the filmmaker on 2002 alien invasion film Signs and 2004 mystery The Village, and now the duo is adding a third film with an as-yet-untitled movie.

The project also reunites Shyamalan with producer Jason Blum, who worked with The Sixth Sense director on the upcoming horror movie The Visit.

Filming is set to begin in Philadelphia, Pennsylvania in November (15).