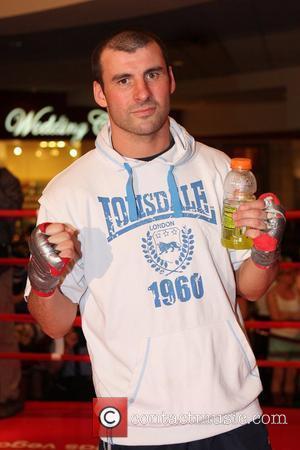 Picture: Joe Calzaghe Welsh boxer Joe Calzaghe had a media day and worked out for his fans and press at Planet Hollywood & Casino. CALZAGHE is...

Boxers Joe Calzaghe and BERNARD HOPKINS brought the stars out in Las Vegas on Saturday night (19Apr08) as Bruce Willis, Sylvester Stallone and Catherine Zeta-Jones claimed ringside seats at their light heavyweight clash.
The V.I.P. section of the crowd at the Planet Hollywood-sponsored fight night was a who's who of celebrities with Willis, Stallone and Zeta-Jones seated alongside Arnold Schwarzenegger, Simon Cowell, Tom Jones, Jay-Z and Jim Belushi.
Crooner Jones also served as one of the night's pre-fight performers, singing the Welsh national anthem for Calzaghe; R+B singer Ray J then belted out an off-key rendition of the U.S. national anthem.
And just like Jones, wearing a purple suit and a yellow daffodil in his lapel, won the pre-bout singing contest, Welshman Calzaghe defeated American Hopkins in a split decision after 12 action-packed rounds of boxing to claim the light heavyweight crown.
The celebrity guests were all on their best behaviour, apart from Rocky star Stallone, who constantly yelled at the boxers and, at one point, rose from his seat to protest a low-blow from Calzaghe that landed in Hopkins' groin, prompting a halt to fight as the winded American attempted to regain his composure.