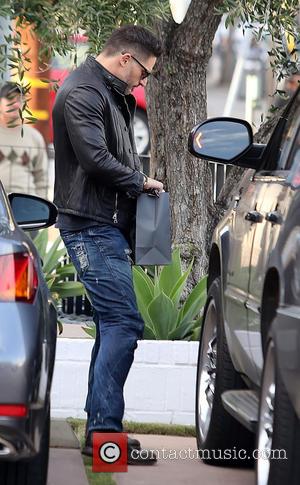 True Blood star Joe Manganiello can't thank director David Ayer enough for handing him a role in new action movie Sabotage, because it gave him the chance to get close to his hero Arnold Schwarzenegger.

After missing out on a role in Training Day, which Ayer wrote, Manganiello found himself living out a dream on the set of the writer/director's latest project, and he admits it was intimidating and daunting at times to act opposite the guy who used to stare at him from a poster on his bedroom wall.

He tells Wenn, "I had a poster of Arnold and all the other Mr. Olympias on my wall as a kid. I'd seen every movie and had 20 minute conversations with my brother doing Arnold's voice and all his movie lines without breaking character. The reason I picked up a weight and started bodybuilding was because of Arnold.

"My pipe dream that I would be an action hero in a movie was because of Arnold... On the set, I was like, 'Don't do something stupid. Don't be an idiot!'"

Manganiello needn't have worried - he and Schwarzenegger quickly became friends: "Right around the time we were shooting, (publishers) Simon & Schuster asked me to write a cutting edge book about men's bodybuilding and here I am sitting next to the man in the make-up trailer.

"I told Arnold about it and he said, 'Whatever you need, I'm there'. He wound up writing this amazing foreword to my book. We kind of travelled the world together... It's really been amazing to be invited into his world because it showed me that I was really short changing what I thought I could do in my life. It showed me that nothing is impossible and I should dream as big as I want, so it's been inspirational and motivational just to be around him."

Schwarzenegger jokes there is a downside to the relationship: "I was very happy to help him but I had no idea his six-pack was going to be better than mine! Now he's taking up magazine and muscle covers. What happened here?"