Despite two horror films and an episode of 'Modern Family' taking the online screen concept, 'Unfriended' might have an interesting enough spin on it.

Horror is a reliably profitable genre, generally cheap to make and always popular with young audiences. The trick is to come up with a new gimmick. It's been 16 years since 'The Blair Witch Project' launched the found-footage craze, which was picked up by the 'Paranormal Activity', 'V/H/S' and '[REC]' franchises, among others, plus one-off hits like 'Cloverfield' and 'Chronicle'. Now with 'Unfriended', there's a new twist: the real-time computer screen horror. The poster for 'Unfriended'

Laptop, tablet and phone screens are dominating life more than ever, and 'Unfriended' plays out in ways that are only too familiar, as the teen protagonist Skypes and iMessages her friends, scrolls through Facebook, Instagrams photos, answers emails and looks up information on Wikipedia all while listening to her favourite music on Spotify.

More: Read The Review For 'Unfriended'

Actually 'Unfriended' isn't the first example of this approach. Joe Swanberg used the same idea in his video-chat short in the first 'V/H/S' anthology in 2012, as did Nacho Vigalondo in last year's webcam thriller 'Open Windows'. There was even a 'Modern Family' episode that consisted only of a real-time computer screen.

Watch The Trailer For 'Unfriended' Here:

What makes 'Unfriended' such a hit is the way it deploys this visual style alongside old-style storytelling. While keeping the gimmicky imagery in constant motion (and thus avoiding the seemingly endless dead screen time in 'Blair Witch' and 'Paranormal Activity' movies), director Levan Gabriadze and writer Nelson Greaves are actually spinning a horror tale in the tradition of 'I Know What You Did Last Summer' or even Agatha Christie's 'And Then There Were None', as teens are picked off one by one by an unseen villain.

Yes, the internet has changed both the way we communicate and the way we scare ourselves silly. So with technology evolving almost daily, it's looking like filmmakers will never run out of these kinds of gimmicks. Surely someone is already writing an iWatch horror thriller. 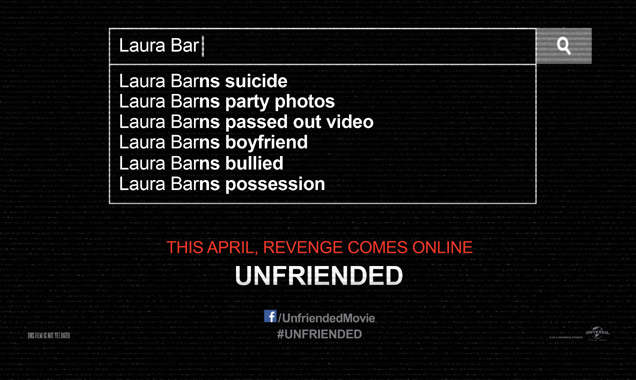 Kate and Luke are co-workers at a craft brewery who have a remarkably close friendship...