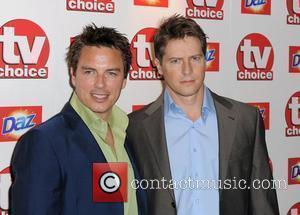 John Barrowman suffered painful burns on his most sensitive area - after he used hair removal cream on his private parts.
The former Desperate Housewives star decided to tidy up his lower regions so he applied the lotion and then covered up by putting his underwear back on.
But when he undressed for bed hours later, he accidentally ripped off a layer of skin - leaving him writhing in agony.
Barrowman tells U.K. TV show Loose Women, "I did it with the cream and I put on my undies and I left it for the day. That evening, I was getting ready for bed and I took my undies off and I took off a layer of skin with it. So, men - don't do it on your things!
"It was very painful. It was like having an acid peel in the wrong place."