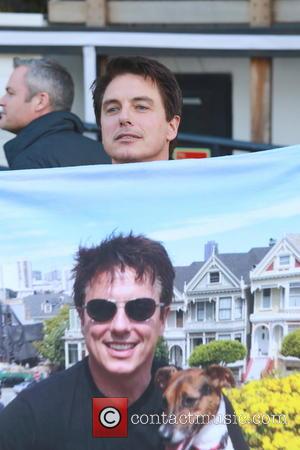 The Torchwood star, who married his long-term partner Scott Gill last year (13), was a guest on daytime show Loose Women but he left the audience shocked when he walked onto the set and immediately kissed host Ruth Langsford on the lips.

He then moved on to fellow presenter Lisa Maxwell and pulled her to the floor as they smooched.

After telling viewers he could "sense the situation", Barrowman then grabbed another presenter, Nadia Sawalha, and gave her a prolonged kiss.

Flustered Sawalha told the actor, "My husband's on his motorbike, he's on his way round to sort this out," prompting Barrowman to reply, "I hope he's handsome!"

As the audience gasped in shock, he added, "My apologies to all the viewers - it's gone completely out of the window right now."