British Comedian John Cleese Is Celebrating After Making His Final Alimony Payment In His Costly Divorce From His Third Wife Alyce Faye Eichelberger. 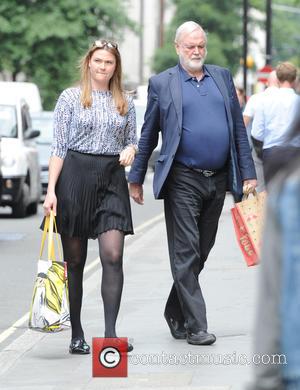 The Monty Python star split from Eichelberger in 2008 after 16 years of marriage, and the divorce settlement included an annual handout of more than $960,000 (£600,000) over seven years, in addition to half of all his earnings during their union.

He famously devised a stand-up comedy show - dubbed The Alimony Tour - to raise money to pay his bills, and he even resorted to selling off signed photos and other memorabilia to boost his funds.

However, Cleese, who wed his fourth wife, Jennifer Wade, in 2012, will no longer have to hand over another penny to Eichelberger after settling the huge debt.

Taking to Twitter.com on Wednesday (01Jul15), the veteran funnyman writes, "Historic day for all the Cleeses ! I've paid my last alimony instalment!! So my wife and are are taking the cats out to celebrate..."

But the actor, 75, insists his ex won't be celebrating, adding, "Several friends tell me my ex-wife says she has no money. So could the person who borrowed $20 million from her please now return it."