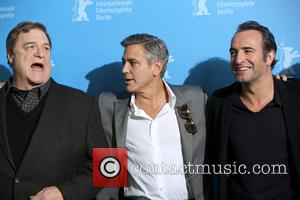 Veteran movie star John Goodman grew emotional on U.S. Tv on Friday (07Feb14) as he reunited with his onscreen daughter Sara Gilbert and reminisced about their time together on hit sitcom Roseanne.

The Argo actor was promoting his new film, The Monuments Men, on Gilbert's daytime show The Talk and he was visibly moved when producers aired an old clip of the former co-stars in the family comedy.

He said, "It (the clip) just touched something in me... You know, they were like my own kids. It's just a strange thing..."

Turning to Gilbert, who he had nicknamed 'Scuffy' onset, he added, "You were great basic training for raising my own daughter."

Goodman then heaped praise on the show's star and creator, Roseanne Barr, for helping to give them their big breaks on such a beloved programme.

He mused, "The more I think about Roseanne, the more I look back on her. I can't believe how remarkable she was. I mean, she told the story that she wanted to tell, which was so prevalent today, about these people who were doing their best, working two jobs, and they still don't have enough to make ends meet. But it was so damn funny... I just love her to death... Those were good times."

Former child star Gilbert also shared her favourite memories from the show, applauding Barr as an "amazing" talent and then paying tribute to Goodman, saying, "You were so fun all week and such a good guy to work with, but when it came (to) the day to tape, no one was more of a perfectionist, more focused. I mean, you really taught me how important it is to care about your art."