Review of Once Again Album by John Legend 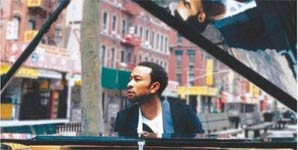 I must be honest here I hated "Saved Rooms" it sounded like the label was pushing John towards pop, I also have to admit that when I have seen him perform the said song live - it sounds so much better, which really rubberstamps my feeling on the song.

Thankfully; the label haven't done too much to the album. For example the track "Heaven", now this is more like the John Legend we all know and love. Breathtaking vocals, that are not subdued or suppressed in the mix and production. A musical sound that seems far more simple and uncluttered than the debut single. The harmonies are dreamy and the backing is as smooth, slick and melodic as the vocal and lyrical content.

"Stereo" meanwhile offers that edgy hip hop styled beat that was more than evident on the debut set, largely due to the influence of his mentor and, the man that actually recognised what a talent Mr Legend is, not just as a musician and songwriter but as a performer too, of course we talk of Kanye West.

The north, south soul divide will surely unite behind the jaw droppingly soulful swayer "Each Day Gets Better". This really is soul, in its purist, undiluted form. Just when you could be excused for thinking things can't get much better than this. Up pops the jaw dropping "King & Queen" this stunning smouldering duet with the amazing Mary J Blige who simply seems to be like a bottle of finest Champaign, because she gets better and better as she gets older. This track sends shivers down the spine as two of the R&B worlds heavy weights stand toe to toe and trust me they don't disappoint.

Following on; the just as exquisite PDA (We don't care), this sublime soul keyboard driven classic, encompasses all what John Legend stands for. "Again" offers the kind of track that makes you use the words genius and John Legend in the same breath. Just him and really only a piano, quite simply phenomenal. Finally folks; "Another Again" is more of that strong soul that the likes of John Legend and Lemar are standing up and fighting to make sure it gets heard and to make sure that in 2006 soul sells and sells well.