Review of So High Single by John Legend 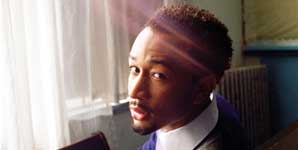 Just when you thought that I might run out of superlatives for the legend that is John, up pops this remix. A mix that leaves your jaw laid firmly to the floor, such is it's breathtaking impact. Add to the mix the amazing Lauryn Hill and you can already start to imagine just how amazing this track is. Mr Legend, his piano playing, musical prowess, power of vocals and stunning lyrics have repeatedly shown what an amazing talent he is.

After a year that saw Mr Legend go platinum in the UK, pick up a MOBO and become a household name. Was it because he's done the same shit as everyone else, was it because he's won pop idol? Nope, because he is an original talented artist that is simply a master at what he does best, making quality soul based music. This is another must for your record collection from the man that was basically discovered by Kanye West and has featured on so many artists albums including the likes of Alicia Keys and Kanye to name two of the many.
4/5
BIGGER