Posted in Press Releases on 18 February 2013 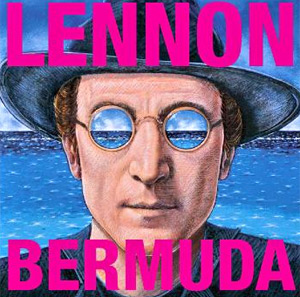 'Know that he loved and was immensely inspired by Bermuda.' - Yoko Ono

A significant and largely untold story of John Lennon's life is now vividly documented in the new book and accompanying double CD 'Lennon Bermuda' to be released this coming April 29th through Double Fantasy Bermuda.

Stories from the moment the former beatle rushed into a pawn shop to buy a used guitar before setting sail for Bermuda aboard a 43ft boat in June of 1980, to his time alone at the helm guiding the Megan Jaye as it was tossed on a tempestuous sea during a fierce Atlantic storm, are recalled in detail for the first time in 'Lennon Bermuda'.
Once on the semi-tropical island of Bermuda, Lennon searched for a rental home and blended in with the unhurried pace of life, enjoying the freedom to relax amongst islanders renowned for not fussing over the famous.

A transformation in Lennon that began on the sailing trip gathered momentum. He was inspired to write and record music again. With his secondhand guitar and basic recording equipment from a local store he worked on songs that ultimately featured on his comeback album 'Double Fantasy', which ended his five-year hiatus from the music business when released later that same year. It is in the Bermuda Botanical Gardens that Lennon encountered the Double Fantasy freesia flower that he chose as the title for his final album.

'Lennon Bermuda' features first-hand accounts from people Lennon met along the way, from the family that rented their home to him, and local journalists he encountered at a disco, to the artist who painted his portrait (with son Sean) as a gift for his wife Yoko Ono. The 120-page book takes the reader step by step on a fascinating journey with one of the 20th century's most gifted artists.

To complement and accompany the book is a double CD featuring a wealth of established artists from around the world, alongside a host of local talent from Bermuda, all paying tribute to Lennon's incredible catalogue with their own interpretations of songs from his Beatle days to his final solo material.

Kicking off with a remix of the Yoko Ono composition 'Walking On Thin Ice' (also the last song that Lennon ever performed on) by Tim 'The Dealer' Deal, 'Lennon Bermuda' sees contributions from the likes of Nils Lofgren, Bryan Ferry, Maxi Priest, Heather Nova and Judie Tzuke nestling alongside artists from Bermuda such as Steve Easton, Phil Morrison and McCartney K.

Lennon's trip to Bermuda is now regarded as one of the most significant moments in the musician's life, acting as a catalyst that led to his reemergence as a recording artist shortly before his murder in New York City in December 1980.

Until now the remarkable story of Lennon's time in Bermuda has been largely overlooked. 'Lennon Bermuda' gathers together for the first time comprehensive accounts from people who encountered the musician during the summer of 1980. The book also follows him on his return to the studio to record 'Double Fantasy' and to the fateful day when he was shot.

Illustrated with photographs and artwork by Bermudian artist Graham Foster, who designed the Double Fantasy sculpture unveiled as a tribute to Lennon in the Bermuda Botanical Gardens in 2012, 'Lennon Bermuda' provides insight into what became Lennon's last summer holiday and his return to music-making.