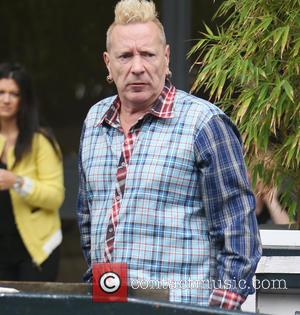 Picture: John Lydon - Photographs of a variety of celebs outside the ITV studios in London, United Kingdom - Wednesday 8th October 2014

Brand has caused controversy in recent months by calling for a revolution to overthrow the democratic system in his native U.K. and urging citizens not to support politicians by voting in elections.

The former Sex Pistols star has now slammed Brand as a "phoney" and called anti-voting activists "'bumholes", insisting that if Brits want to change politics they should "engage with it not reject it".

During an appearance at Britain's Cheltenham Literature Festival, Lydon says, "I'll tell you what rubbishes politics for me - when celebrities get involved. I'm very, very wary of tagging my name in to support any of these f**king phoney b**tards. But don't be like Russell Brand and bumholes like that. If you don't vote, you don't count. You've got to start local. There's f**k all on Tv, so go to town hall meetings and give them f**king hell. I've been thrown out of so many town halls. I'm not being flippant. If you don't start locally you're not going to change the world."