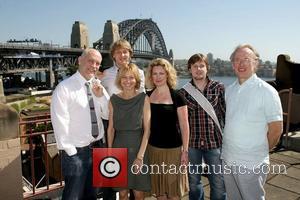 Picture: John Malkovich with writer Michael Sturminger, Ingeborga Dapkunaite, Martene Grimson and Andrei Bondarenko at a press conference promoting his debut on the Australian stage to...

John Malkovich was completely "ruined" by BERNIE MADOFF's Wall Street scam which left him millions of dollars out of pocket.
The Dangerous Liaisons actor was among a number of stars, including Kevin Bacon, Steven Spielberg and Zsa Zsa Gabor, caught out by the rogue broker, who was jailed for 150 years in 2009 after admitting stealing from his wealthy clients.
Malkovich subsequently went to court in a bid to reclaim the $2.2 million (£1.4 million) he lost in the scandal after receiving just $670,000 (£419,000) from the trustees who liquidated Madoff's firm.
The star now admits his finances were totally decimated by Madoff's betrayal, but he's determined to remain upbeat despite his money problems.
He says, "Life can deal you some unexpected, unanticipated nasty little blows. For a long part of life I didn't have any money. I was very happy - it didn't bother me. It (the Madoff scam) ruined me financially but I don't think that matters...
"I've had such an incredible life and such incredible luck in my life and such incredible good fortune, you know it really is easy come, easy go."