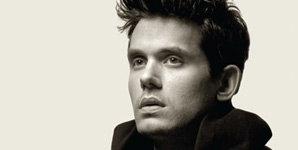 John Mayer is a massive hit in the US, and for his followers here, Battle Studies has been eagerly awaited. But has it lived up to the hype?

Battle Studies is essentially a sombre affair, and I use the word affair loosely to compliment his inspiration. Quoted in June as saying that the album was a 'heartbreak handbook', the entire 45 minutes reflects his luck, or lack of it, in love. We all know about his on off relationships through his appearance in the gossip magazines, but his material tells a slightly different story.

For an apparent light hearted and fun guy, John Mayer appears to lose this at the sight of a studio door. That is until you reach 'Who says'. He becomes less sombre and serious, and consequently more likeable. We're not all heartbroken, and don't want to be brought down. As for applying the concept of heartbreak to a war torn country, I'm not so sure that's a sensitive analysis. Yet it sort of works for him.

This is not to say that I haven't been listening to the album and enjoying most of it. The production is high quality, the material is tight, and his talent remains clear. This is however no Continuum, which in my opinion is his strongest album to date. Battle Studies remains to be a safe release, there is no statement being made here.

Eleven tracks crossing between modern pop and blues, all a self reflection of previous relationships. I can see his aim, something to relate to. 'Friends, Lovers, or Nothing', 'Who Says' and 'Assassin' stand out, but for different attributes. Assassin is perhaps the riskiest track on the album.

An apology has already come out for the lack of a defining guitar solo's on Battle Studies. It's all part of his plan apparently, so I guess we'll see.