There are very few artists who can fill an arena but make every audience member feel like they're at a small intimate venue; John Mayer is one of them. Playing his last European show in support of two albums released in quick succession, Mayer was keen to put into context his new trajectory in a live setting. Following recent throat surgery it's clear that his voice hasn't suffered, although as you'd expect he prefers his guitar to do the talking. While 2012's Born and Raised and this year's Paradise Valley have mined a rich vein of laid back country tinged seventies rock, in a stadium setting they explode into life. 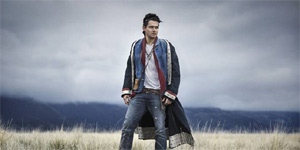 An absence of stage theatrics let the songs take the spotlight throughout, with only a simple video backdrop. For much of the show this displayed a slow moving landscape of the aforementioned Paradise Valley in Montana. Surprisingly John Mayer kept individual songs concise with very little need for extended jams and solos, but when he did display his impressive skills across a fretboard it highlighted how tight and well rehearsed his band is. In particular Aaron Sterling's drums which were a highlight throughout. Indeed Mayer made a point of giving Sterling credit as a drum solo introduced 'Vultures' late in the main set.

Mayer seemed genuinely humbled by the reception he received at Wembley, a week after his gig at the O2. He described the evening as the "best kept secret" in the country. But despite his cult status in the UK, he was able to engage the audience in singalongs throughout and showed a real determination to deliver a special performance. Unlike recent shows he kept early material to a minimum with only one song ('No Such Thing') from his first two records. However he extended his usual set to play for two and a half hours, allowing for some surprises along the way. At the top of the show 'Queen of California' and 'Wildfire' demonstrated how well suited his new material is to an arena setting, with beefed up instrumentation to boot. Indeed Mayer encouraged the audience to get up out of their seats for the duration. The first six songs were culled from across his back catalogue, before the mood changed slightly when he decided to get a little chatty.

While there was no mention of Taylor Swift, Mayer did turn his attentions to Justin Bieber. Perhaps not as odd a choice as it may seem. Like Bieber, Mayer has spent time in the past dealing with the mainstream media dissecting his every move. His response? It's something we shouldn't have an opinion on. We shouldn't care about Bieber, because it's nothing to do with our demographic. The reason we seem to want to have an opinion is that there's no-one speaking for our generation. It was a revealing moment, it showed that John Mayer the superstar has grown up and taken a step back from his fame. Equally it presented the notion that many of Mayer's recent songs are autobiographical, as he then launched into a version of 'Speak For Me'. He later concluded that songs like 'Age of Worry' were written as reminders to himself to take a step back and reassess life, before falling into the traps that his younger self had.

With that in mind the likes of the bluesy JJ Cale cover 'Call Me The Breeze', an acoustic and intimate cover of Springsteen's 'I'm On Fire' and even the amped up version of 'Paper Doll' complete with an overblown solo, took on a more personal and mature outlook. The slow burning 'Gravity' closed the main set before an encore that included a rare outing for 'Walt Grace' from Born and Raised and a crowd pleasing 'Dear Marie'. Over 21 songs Mayer managed to put into context everything he's done in the past few years. He's decided to take a different path, one that makes him more relaxed and contented. It's a path that means he can play arena shows with little fuss or fanfare, and in doing so he can genuinely enjoy himself, kick back and have a good time. For the audience that makes the experience even better. You're not burdened with the weight of expectation that he's going to react to the latest media controversy, instead he's concentrating on the songs and ultimately that's all that matters. If you needed any convincing of Mayer's current state of mind he made it very clear towards the end of the show as he displayed lyrics on the screen. They included "Worry, why should I care?" well indeed.