Are You John Mayer's Ex? He Dares You To Write A Song About Him 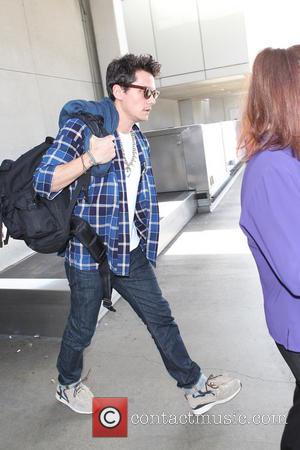 John Mayer has addressed the news that his ex-girlfriend Katy Perry is planning on writing songs inspired by their relationship. The singer songwriter is usually pretty guarded about his personal life but for some reason felt comfortable talking to a TMZ pap about his famous exes and how some choose to write songs about him.

There was a touch of arrogance to Mayer's words as he opened up on dating fellow pop stars. Confronted by the news that Perry has plans for a John Mayer break-up song in the vein of Taylor Swift's 'Dear John,' Mayer was bolshy.

"I actually want everybody's song to go #1," he said as a self-confessed "third wheel" whilst out with two friends. "I purposely stopped writing hits to give other people a chance to have #1 songs. I just stand to the side." "I have super strength for gang-ups, I'm fine," Mayer replied when asked if he was bothered by the songs his former lovers write about him. "That's what you're supposed to do, man, you're supposed to write songs. You're just not supposed to tell everybody you're doing it." Miaow.

The photographer then told John that "it's scientifically proven that every time your name is in a song, it goes to number one." The singer let out a loud laugh and responded "I've never heard of that but I really should have gotten a car tonight!" Whilst that so-called "scientific" reasoning didn't apply to Taylor's not-number one break-up track, it has been speculated that Mayer fired back in his song 'Paper Dolls.'

In a recent interview with Cosmopolitan, Perry discussed her relationship with Mayer and revealed that things aren't frosty between them. "There's no bad blood," she told the magazine. "But I'm sure there will be inspired songs." John Mayer Openly Encourages His Exes To Write Hit Break-Up Tracks About Him.