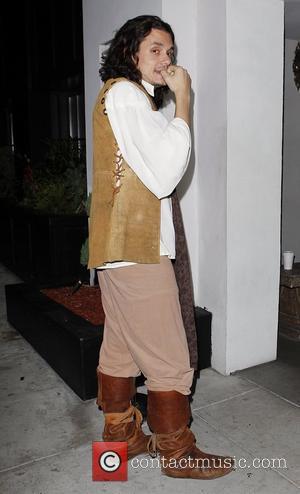 John Mayer, Delta Goodrem and Colbie Caillat were among the pals who joined former EURYTHMICS star Dave Stewart for a set at the Troubadour in Los Angeles on Friday night (28Sep12).

Mayer teamed up with Stewart and his band for encore performances of Gypsy Girl and Me and new track Slow Motion Addict No. 2, while Caillat took the stage to sing on Bulletproof Vest, and Aussie stars Goodrem and Amorosi performed renditions of Eurythmics hits You Have Placed A Chill in My Heart and Would I Lie To You, respectively.

Stewart says, "It was such great fun to have all these amazing musicians and singers join me onstage at the Troubadour.

"It's very surprising and coincidental that three of them were from Australia; Orianthi on guitar, and we were also joined by Vanessa Amorosi who belted out Would I Lie To You like there was no tomorrow, and Delta Goodrem who sang along with me on acoustic guitar doing a really emotional rendition of You Have Placed A Chill In My Heart.

"I was also joined by Colbie Caillat to sing a duet, Bulletproof Vest, from my album The Blackbird Diaries. A very dapper looking John Mayer leapt up for the encore to play an amazing blues guitar on The Gypsy Girl and Me and Slow Motion Addict No. 2."