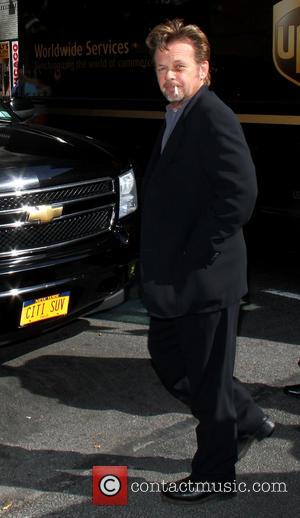 Rocker John Mellencamp is sporting a black eye after a bust-up with his teenage son.

The Hurts So Good hitmaker, 61, was quizzed about the injury to his left eye after turning up for an appearance on America's Late Show with David Letterman on Wednesday (06Jun13) with his musical collaborator, horror writer Stephen King.

Commenting on the bruising, host David Letterman joked, "Was there trouble backstage because you look like you have a (black eye)...?", prompting King to quip, "The collaboration is not always easy!"

Mellencamp joined in the laughter, adding, "Small town, not much to do in the evening!" before coming clean about the real reason behind his black eye.

"My son punches me and my dad calls me and says, 'John, you need to change your attitude.'"

Mellencamp, who is dating actress Meg Ryan, did not elaborate on what prompted the altercation, or identify which of his two sons, Hud, born in 1994, or Speck, born in 1995, was behind the blow.