The 52-year-old funnyman recently admitted he is looking forward to see what changes the new host will bring to the Comedy Central show.

Last week John Stewart shocked his loyal fans by suddenly announcing will be stepping down from his hosting position on 'The Daily Show' when his contract expires at the end of this year, and now the 52-year-old funnyman has offered his thoughts on what he wants to see in a successor. Stewart is leaving Comedy Central at the end of this year

As Stewart has been at the helm of the Comedy Central show since January 1999, which has won an array of Emmy Awards over the years, it is safe to say he knows what the next host needs to do to be successful, but at the same time he does think it is time for change.

"What I want to see there is the next iteration of this idea," Stewart told Catie Lazarus, host of February's 'Employee of the Month' podcast. "I feel like the tributaries of my brain combined with the rigidity of the format. I feel like I used every permutation of that I could possibly use."

"I would love to see the next iteration of that" he added, "and it's exciting to watch it evolve and see it mutate and change and fill different gaps and different ideas. That's the part that I'm looking forward to seeing."

Although Stewart won't be hosting 'The Daily Show' once his contract expires, he isn't totally retiring from the entertainment industry altogether. The actor's decision to leave was simply due to him wanting to spend more time with his wife and children.

"I just needed more flexibility," he said. "I got maybe four or five more years with the kids until they really don't want anything to do with me. And I'm just not there. You can't [work from 9 a.m. to 9 p.m.] for 16 years and think you're going to be able to tell them to not smoke pot. You can't show up at 9 p.m. and go, 'Don't get high. OK, goodnight, sweetheart.'"

But walking away from something Stewart made special for the last 16 years will not be easy.

"The thing I'll miss the most I think is that sort of thoughtful conversation in the morning that turns into a rewrite dance party," he said. "That feeling of...we're all bereft and we're having a very tough conversation in the morning and then finding something by 4:30 or 5 in that rewrite room that still gives us that stupid, childlike jolt of joy, that...joy machine." 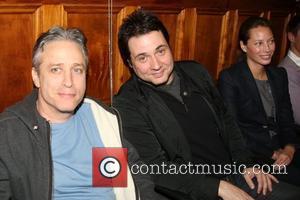