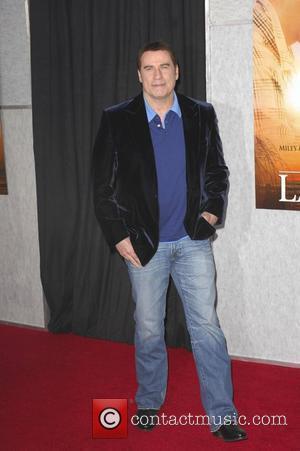 John Travolta's actress wife Kelly Preston celebrated her pregnancy by hosting an all-female baby shower for friends and family in Los Angeles last week (13Aug10).
The Hollywood stars confirmed they were expecting their third child in May (10), and Preston, 47, prepared for the impending birth by gathering with loved ones for a girly bash at the Beverly Hills Peninsula hotel on Friday (13Aug10).
Thirty guests were treated to high tea and were served finger sandwiches, scones and cakes as they mingled, costing the Travoltas $75 (£50) per person, reports U.S. tabloid the National Enquirer.
A source tells the publication, "Kelly's carrying beautifully. She's glowing and says she feels fantastic...
"Kelly received gorgeous gifts, and each guest made her an individual baby bib at the table and signed their names. It was very sentimental."
The stars' baby joy comes over a year after the tragic death of their 16-year-old son Jett, who died in January, 2009 after suffering a seizure.
Preston and Travolta, who are also parents to daughter Ella, 10, will welcome the new addition later this year (10).