James Bond fever turned into a global epidemic this week, as the franchise celebrated its 50th birthday with the release of Adele's stunningly retro theme for the upcoming Skyfall, Daniel Craig's third outing as 007. The song already sounds like a classic, and anticipation will only grow until the film's release in the UK in two weeks and in America next month. Meanwhile, the documentary Everything or Nothing hits cinemas this week to bring us up-to-date on everything Bond so far. 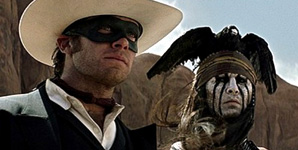 But of course the big worldwide release this week is Liam Neeson's return to action in Taken 2, where he once again takes on the Albanians who have kidnapped a member of his family. It's even more ridiculous than the 2008 original, but will no doubt be a huge hit.

New trailers this week gave us some movies to look forward to. Armie Hammer and Johnny Depp star in a new take on The Lone Ranger from Gore Verbinski, director of Depp's first Pirates trilogy. It looks like a big, explosive action Western with yet another offbeat turn from Depp. Although we have to wait until next summer to see it. Only slightly less bombastic is Identity Thief, which reunites Jason Bateman with Horrible Bosses director Seth Gordon for a hot-topic comedy about a guy whose identity is stolen by a crazy woman (Bridesmaids' scene-stealer Melissa McCarthy). The trailer makes it look crazed and rather silly. But also unmissable when it opens early next year.

A more sophisticated approach to wacky slapstick is promised in the trailer for Gambit, a remake of a 1966 art forgery comedy that starred Michael Caine and Shirley MacLaine. This version is written by the Coen brothers and stars Colin Firth and Cameron Diaz, with witty support from Stanley Tucci and Alan Rickman. The film opens next month.

And finally, Arnold Schwarzenegger was back with the release of his autobiography Total Recall. In between production on a busy slate of comeback movies, he's been out this week promoting the book with a lively appearance on The Daily Show with Jon Stewart. As he arrived at the studio, he signed autographs for fans but only gave the paparazzi a tiny wave.