'The Lone Ranger' stars Johnny Depp and Armie Hammer have blamed bad reviews in the US for the film's underwhelming response at the box office. 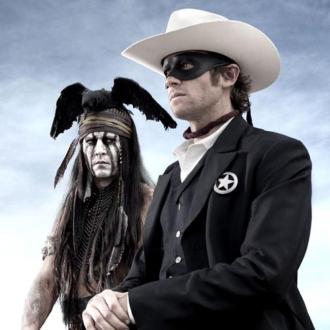 Johnny Depp and Armie Hammer have blamed bad reviews for the failure of 'The Lone Ranger'.

Disney's costly blockbuster flopped at the US box office last month - grossing just $86 million in North America so far, despite a $225 million budget - and the film's stars believe the underwhelming public response is down to harsh reviews in America.

Depp said: ''I think the reviews were written seven to eight months before we released the film.''

The actor - who plays Native American spirit warrior Tonto - reunites with 'Pirates of the Caribbean' director Gore Verbinski and producer Jerry Bruckheimer for the film, and believes pressure was placed on them because of the success of the earlier franchise.

He added: ''I think the reviews were written when they heard Gore and Jerry and me were going to do 'The Lone Ranger'. They had expectations that it must be a blockbuster. I didn't have any expectations of that. I never do.''

Disney temporarily halted filming on the Western adventure in 2011 due to ballooning costs and Hammer - who stars as the titular character - insists US reviews focused on the hampered production rather than the movie itself.

He told Yahoo! UK and Ireland: ''While we were making it we knew people were gunning for it. I think it was the popular thing when the movie hit rocky terrain, they jumped on the bandwagon to try and bash it. They tried to do the same thing with to 'World War Z', it didn't work - the movie was successful. Instead they decided to slit the jugular of our movie.''