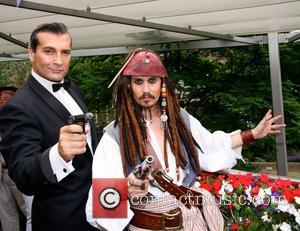 Johnny Depp is "100 per cent" dating his Rum Diaries co-star Amber Heard, following his split from long-time partner Vanessa Paradis. The couple announced the breakup on June 19, 2012 after 14 years together.
It looks as though Depp has already moved on from the split, with the 26-year-old bisexual actress Heard. A source tells US Weekly magazine, "They are 100 per cent dating.He treats her really well". Another insider has already confirmed that Depp bought Heard a horse this spring, so that she could join him on the trails in New Mexico. The pair met on the set of the Hunter S Thompson movie in 2009, though didn't become romantic until the film's promotional tour in 2011, when Depp was already estranged from the French model and actress Paradis. Amber recently split from her girlfriend Tasya Van Ree, and a pal of the star said, "They started sleeping together during the press tour". Last month, Paradis was photographed reportedly house-hunting in the Beverly Hills area, taking a keen interest in numerous properties priced between $7-10 million.
Depp's forthcoming movie schedule is looking unusually empty, though this may reflect his current personal problems. He's currently working on 'The Lone Ranger' reboot, though a fifth 'Pirates of the Caribbean' movie represents his only other work. No release date has been set for the latest in the adventure franchise.