Johnny Depp says the horse he worked with in 'The Lone Ranger' was a ''pleasure'' to be around. 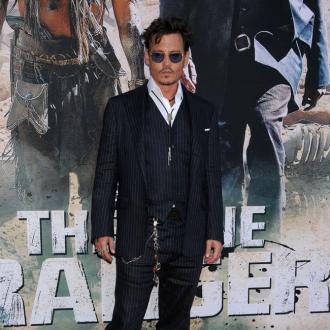 Johnny Depp formed a close bond with his horse on the set of 'The Lone Ranger'.

The 50-year-old actor plays Native American warrior Tonto in the Disney Western film and he is glad he got to spend so much time with such a graceful animal which he became very fond of.

He said: ''I'm glad my long scenes with a horse were in a Disney film as opposed to some other kind of film. The horse was a pleasure, he didn't make any sort of sudden moves towards me or anything like that. I wasn't frightened for my life ... It went well with the horse. I mounted him, he did not mount me.''

However, Depp and his animal pal did have one accident on set when the horse jumped and tossed him out of the saddle.

During an interview on 'The Radio 1 Breakfast Show with Nick Grimshaw' today (25.07.13), he said: ''We were running the horses pretty hot one morning and we took off like a bullet and suddenly, my horse decided to take a little jump and when it did, my saddle leant to the left and I went with my saddle so I found myself hanging onto the side of this very powerful beast. And all I could think about were hooves.''

In the movie - which is based on the 1950s TV series of the same name and also stars Armie Hammer - Depp plays two versions of Tonto, one young and one as an old man.

After he'd been through make-up, Depp looked in the mirror and he couldn't believe who he looked like.

He revealed: ''I looked exactly like my great-grandmother ... although I've never seen her shirtless, nor in a museum exhibition.''