Former couple Johnny Depp and Vanessa Paradis are putting on a united front from the sake of their children, Lily-Rose, 13, and 10-year-old Jack. 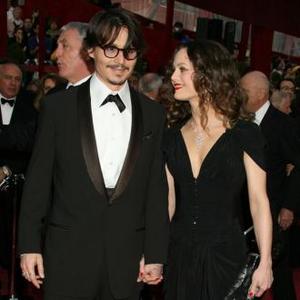 Johnny Depp and Vanessa Paradis are putting on a united front from the sake of their children.

The couple announced in June that their 14-year relationship was over and despite their split, they want things to remain as amicable as possible for Lily-Rose, 13, and 10-year-old Jack.

So the whole family recently spent time together at their $5 million mansion in the South of France, where they were openly affectionate with each other.

A source said: ''They were both relieved they got along well. They ventured to the nearby Plan de la Tour market o and they were joking around. At one point, Johnny held Vanessa's hand!''

However, sources claims the pair have no plans on getting back together, with one saying: ''They are looking forward, not backward.''

Last month, it had been claimed, Johnny wanted to get back with Vanessa and had given her an antique gold pendant bearing the message ''My heart is always with you.''

A source said: ''They are having a family holiday to show the kids they are still a strong family even if those two are split or not.

''But the fact he presented her with such a touching gift, it's almost as if they could make another go of things. Johnny wants to be with his family, he's a very family orientated man. His kids mean everything to him.

''What they need more than anything is to get together far away from Hollywood and that is what they are doing.''

Since their split Johnny has been linked to actress Amber Heard.

However, the pair recently decided to take some time apart.