Johnny Depp has signed on to play the part of Dr. Seuss in a new live-action adaption of the classic children's books. 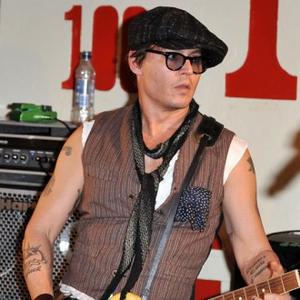 Johnny Depp is set to play Dr. Seuss in a live-action version of the classic books.

The 'Pirates Of The Caribbean' actor will take on the legendary character in an adaptation of the books by Dr. Seuss - real name Theodor Geisel - from Illumination Entertainment and Infinitum Nihil.

'In Treatment' scribe Keith Bunin will write the screenplay, while Johnny will also produce the project with Christi Dembrowski, Christopher Meledandri and David Kennedy.

It is not the first time a work by Geisel has been made into a film - in 2000 'How the Grinch Stole Christmas' was released and three years later 'The Cat In The Hat' was made.

He began his career drawing political cartoons during World War II before switching to his distinct children's books.

Johnny has a long-history of playing eccentric characters - he played the Mad Hatter in 2010's 'Alice in Wonderland' and Willy Wonka in 'Charlie And The Chocolate Factory'.

He is currently shooting the part of vampire Barnabas Collins in Tim Burton's 'Dark Shadows'.