Bon Jovi Returns To The Eighties For Saturday Night Live 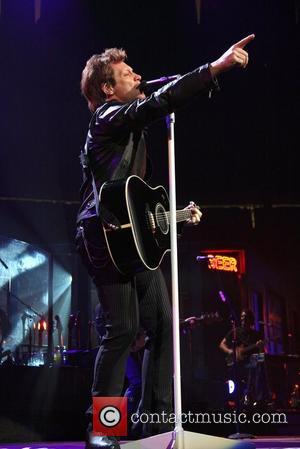 Jon Bon Jovi was whisked back in time for a hilarious skit on America's Saturday Night Live at the weekend (13Oct07) when he helped re-enact show regular Amy Poehler's childhood dream of meeting the rocker. Hosting SNL for the first time, Bon Jovi stepped out of a poster for a 1986 sequence in comedienne Poehler's make-believe bedroom. Sporting his trademark long permed hair and a bandana enjoyed a laugh at his own expense, offering advice to his co-star's troubled teen character. The rocker said, "Growing up was hard for me too. Let me tell you a story about John Francis Bongiovi Jr (Bon Jovi's real name), he wore orthopaedic shoes and he played the French horn. He was just another fat kid... so every kid in the neighbourhood called him Johnny Meatballs. "Everything sucked for him too until he threw down that French horn and picked up the guitar." He added, "Amy, 20 years from now you're gonna be a castmember on Saturday Night Live and I'm gonna be the host. Is that blowing your mind or what," to which Poehler quipped, "Wait, you're gonna be the host." He proved to be the perfect host - even helping nervous bandmate Richie Sambora out when the guitarist forgot his lines during the live broadcast. But Bon Jovi was obviously upset his bumbling bandmate had made him look foolish on live television - after the pair joined the rest of the group to run through new song Lost Highway, the rocker hurled his guitar plectrum at Sambora in disgust. Bon Jovi also played a vest-wearing New Jersey gameshow contestant and an angry alien on SNL. He also re-enacted the moment his band chose their name in a comedy skit.