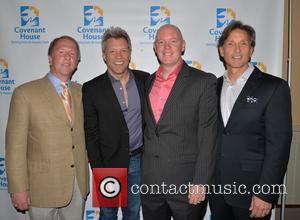 Rocker Jon Bon Jovi has opened up about his bid to buy an American football team, insisting he hopes to make the "Bills successful in Buffalo".

The Bon Jovi star is part of a Canadian consortium that has submitted paperwork expressing interest in buying the organisation, which was put up for sale following the death of longtime owner Ralph Wilson in March (14).

However, speculation spread that the group was planning to potentially relocate the franchise to nearby Toronto, Canada, which had many of the New York team's fans upset.

In a letter published by the Buffalo News on Sunday (03Jul14), Bon Jovi writes about his bid for the first time in a missive titled Why We're Bidding on the Buffalo Bills, insisting he and his partners are only interested in helping the team thrive in the U.S.

He writes, "There has been a lot of conjecture, so we think it's important to clarify our intentions to the fans of the team and people of Buffalo. I know how much the Bills mean to the people of this region.

"So I want you to hear this from me: I'm not risking it all to let you down. If we are given the chance to be the next owners of the Buffalo Bills, I promise you that we will bring the same passion that you do every Sunday, every day.

"My family and I are prepared to make this life-changing commitment to be part of the Bills. This is not a hobby or an acquisition. Building a winner on and off the field will be job one, and I intend to spend as much time on the ground in Buffalo as needed to accomplish that goal."

Bon Jovi insists his intention is to "carry on Ralph Wilson's legacy" in Buffalo, and he and his group are committed to working with local officials and members of the business community to find a new stadium site in the region, after the Bills' contract to play at the Ralph Wilson Stadium in Orchard Park ends in 2019.