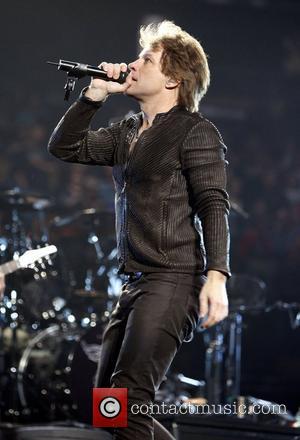 Jon Bon Jovi rocked the Wells Fargo Centre in Philadelphia last night (2nd March 2011) on his 49th birthday.
Jon Bon Jovi, the acclaimed American musician turned 49-years-old yesterday and celebrated by playing a sold out concert in Philadelphia, reports the Philadelphia Daily News.18,500 fans descended on the Wells Fargo Centre to attend the special birthday gig. Greg Suplick, a lifetime Bon Jovi fan, said he surprised his 8-year-old daughter Emilea with a pair of tickets shortly before the concert was due to begin, adding, "This is the first time I've ever been able to take her out just dad and daughter". The 'Birthday Concert' had seen tickets changing hands for extortionate amounts of money and the newspaper note that "a 29-year-old professional scalper who declined to give his name sold six tickets last night for $150 each. He and at least 10 other men hustled through the evening cold".
Jon Bon Jovi is currently midway through a world tour. He is set to play Chicago, San Antonio and Las Vegas before passing through Salt Lake City, Vancouver and Montreal. The 49-year-old will then head to Britain where he is set to perform in Manchester, London, Bristol and Dublin.