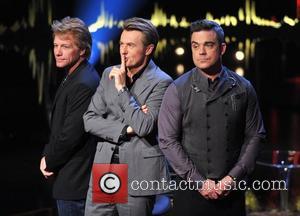 Rocker Jon Bon Jovi has been left heartbroken by the havoc and devastation Hurricane Sandy has wreaked on New Jersey after returning home on Thursday (01Nov12) to survey the damage for himself.

The Bon Jovi frontman cut short a promotional visit to the U.K. to be with his wife and kids after they were caught up in the superstorm as it battered America's East Coast on Monday (29Oct12), and he was taken aback to see just how badly his neighbours were suffering.

During an appearance on U.S. breakfast show Today on Friday (02Nov12), he said, "It's hard to see your hometown devastated like this... My grammar school turned into a shelter; people's homes gone and them saying to me, 'We are now homeless, we never intended to be homeless'. These are hardworking, blue collar people."

The star was also saddened to see his childhood hangout at the Jersey Shore almost completely wiped out by the storm: "(It's) tragic. The inner sleeve of the New Jersey album was shot on that boardwalk. I spent my childhood running down to that boardwalk... Now it's gone. The entire Jersey Shore that I knew is gone."

Bon Jovi will help to raise funds for the relief effort by joining his fellow New Jersey native Bruce Springsteen, Christina Aguilera and Sting as part of the star-studded Hurricane Sandy: Coming Together Benefit telethon, which will air live in the U.S. on Friday night (02Nov12).