Jon Hamm for the Oscars? Actor Is Hilarious Host of the ESPYs [Video] 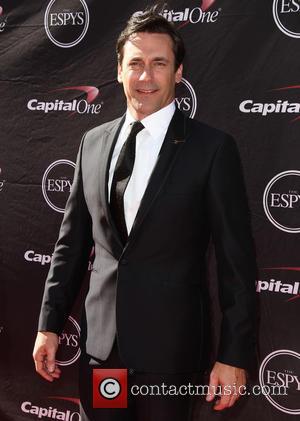 The actor took aim at Disney's huge flop The Lone Ranger, telling the audience, "I'm a lifetime sports fan, but honestly I still think it's better to be an actor. For example.Chris Bosh was recently fined $5,000 for flopping, meanwhile, recently Johnny Depp recently got paid $20 million for flopping. It's just better."

Later, he joked, "I play a troubled advertising executive so pretty much like everyone else here, I thank god every day for advertising."

In a skit about America's success at the Olympics, Hamm said, "Usain Bolt proved he is the fastest man on land. Michael Phelps proved he's the fastest man in water, and Ryan Lochte proved he's not the sharpest knife in the drawer," to the delight of the crowd and the dismay of the famously, er, stupid swimmer.

So it starts here. The campaign to have Jon Hamm host the Oscars 2014. I mean, of course we want Ricky Gervais back for the Golden Globes, but, yeah, Hamm for the big-one.

Check out our full gallery from the ESPYs! The Ever Cool LeBron James with Savannah Brinson