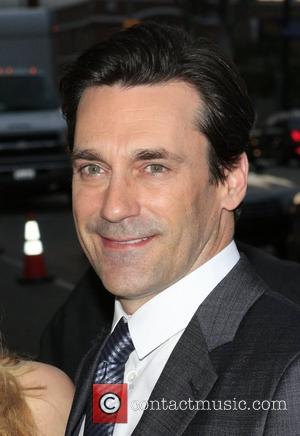 Jon Hamm seemed fairly confident in his own opinions when he branded Kim Kardashian as a "f*cking idiot." The Mad Men star has now tempered his argument somewhat, though, insisting that his comments were taken out of context. His u-turn may have been brought about by Kim's response on Twitter but Hamm seems keen to ensure that his remarks don't evolve into an inflammatory celeb-war.
Talking to Access Hollywood after PaleyFest 2012, Jon Hamm reportedly said "I think that my quote was a little bit misunderstood. I think that she's - I've never met her. I would never say anything personal about anyone that I have not met." These comments were made in addition to a previous statement that he made to E! News, explaining that, although he mentioned Kim Kardashian and Paris Hilton directly, his original remarks were more a comment on society as a whole and the tendency to celebrate stupidity, rather than genuine talent. "My quote was simply about that version of television and that version of American culture being celebrated and it's not something that I particularly enjoy," Hamm told Access Hollywood. "But the quote was obviously taken out of context and you know, there you go."