Jon Hamm is a huge fan of British comedians and thinks humour in the US is much more tame than in the UK. 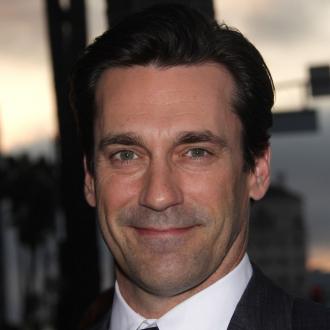 Jon Hamm is a big fan of British comedy.

The 'Mad Men' star says he loves how humour in the UK can be about sensitive topics such as terrorism and still be funny and he admits he is in awe of comedians including Russell Brand and Sacha Baron Cohen.

He said: ''I love Russell Brand - and Sacha Baron Cohen. Eddie Izzard, love him - he's so good. I met him once when I was doing the TV sketch show 'Saturday Night Live.'

''And you guys go places you can't in America. Like 'Four Lions' - a funny film about terrorism and terrorists. It's still a very, very sensitive subject, and only someone like Chris Morris could pull that particular tightrope act off... I'm a little bit of a comedy nerd.''

The 41-year-old star says staring in advertising drama 'Mad Men' has given him an excellent platform to pursue his love of comedy.

He said: '''Mad Men' gave me the chance to host 'Saturday Night Live', which was literally a childhood dream - I never thought I'd get to do that. I actually got to sit and bulls**t with the writers.

''And I got to do '30 Rock!' I love that show profoundly. It is exquisitely funny in so many different layers. I get a lot of scripts, and you have to be really careful about what you pick - but' SNL', '30 Rock', this? You take that opportunity as soon as it comes up.''