Mad Men: Did Don Draper Make A Move On Joan? 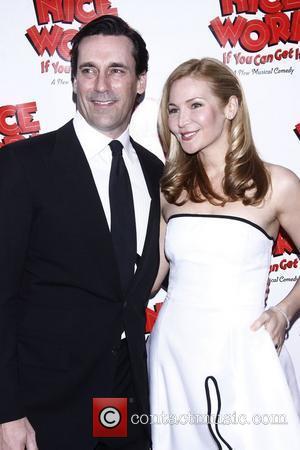 Picture: Jon Hamm and Jennifer Westfeldt Broadway opening night of Nice Work If You Can Get It at the Imperial Theatre  Arrivals. New...

Sunday's episode of Mad Men (May 20, 2012) saw Jon Hamm's Don Draper get close to office manager Joan Holloway, played by Christina Hendricks. After test-driving a Jaguar for a new account, Don and Joan took a break in a nearby bar and held "one of the great conversations in Mad Men history", according to the New York Daily News.

Joan revealed that her husband was seeking a divorce, leading Don to suggest that splitting up was actually a great thing, especially to escape from a miserable marriage. Draper joked about the amount of flowers Joan used to receive when he first started at the ad agency, and things got wistful for a moment, with Don wondering why an anonymous guy at the bar was making a move on a woman. He philosophically mused that perhaps the man just wanted somebody new, adding, "He doesn't know what he wants". Things began to get tense, before Don paid for the drinks and Joan's cab fare home. After the chat, Don arrived back at his city apartment to find his wife Megan so angry that she threw a plate of food, later asking him whether he still loved his job.

There are just three episodes left to air in the fifth season of Mad Men, which has so far received glittering praise from critics. Show creator Matthew Weiner last revealed how he paid $250,000 for the rights to use the Beatles song 'Tomorrow Never Knows' during the episode 'Lady Lazarus' on May 6, 2012.