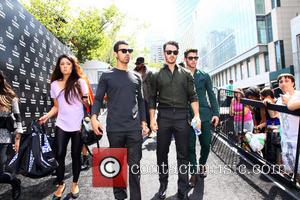 The Jonas Brothers refuse to feel offended over ongoing speculation about their sexuality, insisting they feel a close connection to their gay fans and friends.

Gay rumours have swirled around all three of the pop stars at some point, despite Kevin Jonas marrying Danielle Deleasa in 2009, and his brothers, Joe and Nick, dating a string of beautiful women.

Now they have been interviewed by gay magazine Out, and reveal they remain unfazed by continuing speculation about their sexuality.

Joe tells the publication, "We have a lot of gay friends and gay fans. It's a boy band stereotype; people assume, but we don't take offence."