By Chris Cabin
Good
You count them to put you to sleep and you broil them to munch on after a lazy church Sunday. They get sheared to make quite a bit of your clothes and are fluffy and innocent enough to let your toddler give them a big, soft hug. But in New Zealand, they'll eat you, your family, and the man who had the audacity to try and cut off their fluff. Yes, even sheep now enjoy a place in the human-devouring field of horror films. Feasting on endless intestines, faces and even ear lobes, the bloodthirsty ewes of Jonathan King's Kiwi cocktail Black Sheep should not be trifled with.

Absurdist to the nth degree, King dabbles in werewolf and zombie constructions to create this gooey, gross concoction of horror ethos. Per Danny Boyle's instructions, it all starts with those PETA bastards. An animal rights dope named Grant (Oliver Driver) and his groove-appropriate gal-pal Experience (Danielle Mason) hijack a flesh-hungry lamb from a laboratory that was due for destruction only moments later. Soon enough, the sucker gets loose and digs in on Grant's ear before spreading the hunger to the rest of the herd. 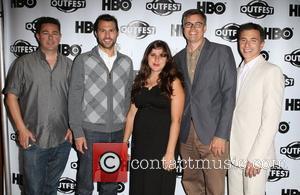 You count them to put you to sleep and you broil them to munch on...