Officially a debut album, but his second solo effort, 'Gentle Spirit' is a follow up to the unreleased 'Frankie Ray' in 2007. Named top up and coming artist of 2011, Wilson's 'Gentle Spirit' was eagerly anticipated by folk and psychedelic rock fans. Gaining respect from highly established musicians such as Elvis Costello and Jackson Browne and touring with the likes of Wilco, Jonathan Wilson isn't exactly a nervous newcomer with an acoustic guitar trying to creep into the alternative, folk circle of rock music. He's already there. 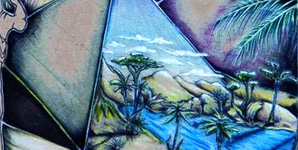 The album has a dreary, moody feel to it; imagine sitting on a creaky, rocking chair on a wooden terrace, staring out towards the vast, dry plains of deep south USA and you should get the idea. Title track 'Gentle Spirit' opens with reverb laden piano chords and the tone of the album is instantly clear, as a crescendo gradually builds up and a burst of percussion supports the strained vocals and hypnotic instrumentation the sense of relaxation is overwhelming. The ongoing lyrics of 'gentle spirit find a home' sustain this sensation for the final, blissful minute. Second track 'Can We Really Party Today?' initially provides a more upbeat feel until the smooth chorus enters and an acoustic guitar strums casually to Wilson's tormented vocals, lyrics of 'can we really party today, with all that's going on' sway throughout.

Wilsons crisp vocals and perfectly composed string, organ, guitar and percussion parts are a constant feature throughout. However 'Desert Raven' is a key example of one of the few flaws in 'Gentle Spirit'. The spiralling guitar part, which, at first, is thoroughly pleasant seems to go on and on, and as soon as you think you've escaped the initially enticing riff with the introduction of the screeching strings and breathy vocals, it returns a minute or two later, like an annoying fly on a summers day. Subtle, stripped down tracks such as 'Rolling Universe' are only genuinely noticed and appreciated on second and third listens which isn't necessarily a bad thing, 'Gentle Spirit' is a sort of album that strives as the number of listens increases, rewarding the patient listener.

The ten minute, epic 'Valley Of The Silver Moon' closes the album, which in itself is lengthy, with eight of the thirteen tracks lasting over six minutes. The final track swaggers smoothly along with an electric guitar forming the solid base of the mix, joined by a piercing sixties sounding organ and Wilson's casually delivered vocals. This lethargic nature is present throughout the album and gives it, at times, a certain class and style, whilst at other times it can often become slightly boring and arduous. However 'Gentle Spirit' is a refreshing and confident debut which deserves to boost Jonathan Wilson up further in the modern era of alternative, folk rock.