Singer Romeo Santos Found Comfort From His Furious 7 Co-star Jordana Brewster As He Prepared For His First Movie Role. 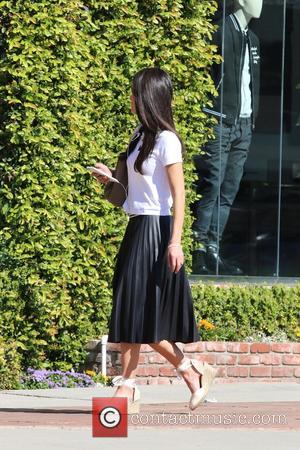 Picture: Brazilian-American actress Jordana Brewster who recently starred in 'Furious 7' was spotted out wearing a black pleated shirt and white top and red shoes out...

The Grammy-nominated Latin superstar is getting ready to make his debut as a film actor in the latest instalment of the blockbuster action franchise, and he admits that getting in front of the camera this time around was more daunting than he thought.

He tells Billboard, "I must confess I was a bit nervous. This is not my lane. I'm always onstage, and everyone there already loves me, so I go with this certain confidence. Here, it's a different world."

But the Odio hitmaker has longtime Fast & Furious star Brewster to thank for helping him feel relaxed on the first day on set.

He says, "When I began, Jordana Brewster made me feel so comfortable. I told her I was a bit nervous and she said, 'Look, sometimes I mess up on my lines; it's just part of the game.'

"It was very encouraging to hear people coming up to me and say, 'You're doing a great job.' I was like, 'Good, because I don't want to mess this up. I really want to do this right.'"