Review of Hand On Your Heart Single by Jose Gonzalez

With the aid of being featured on a TV campaign, Jose Gonzalez's "Veneer" album landed a place in the top ten at the beginning of 2006, as did his single "Heartbeats". Born to an Argentine father in Gothenburg, Sweden, he grew up on a diet of Latino sounds mixed with European pop, and has recently worked with Zero 7.

Kylie Minogue fans will recognise this track as the pop princess' chart-topper from 1989, but it has been given a complete makeover. Stripped to an acoustic guitar and Gonzalez's warm vocals, it has become a soothing and melodic piece that could easily soundtrack a future rom-com movie. It is a fine example of a cover breathing new life into an existing song, and far preferable to the relentless dance mixes and samples that are released with annoying regularity. 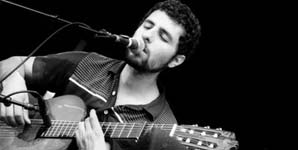